Links and resources are located at bottom of the page

Dean Acquaviva, Marie Tagliaferri, and Ken Kendrac helped fund and create a memorial to first responders on Pilla Avenue in Lawrence Township. The memorial was officially dedicated on September 11, 2018.

After Lawrence Township decided in 2006 to close the Lawrence Township First Aid Squad and inaugurate a fully paid staff, the squad’s three trustees, Marie Tagliaferri, Dean Acquaviva, and Ken Kandrac (all Lawrence natives) had to make three decisions: what to do with their building, what to do with the lot they owned across the street and how to disburse remaining funds donated by the community.
First, they tackled the easy one and decided to donate their building and equipment to the township. “It seemed logical—it was already set up as an ambulance structure, with three bays, and places to sleep,” Acquaviva said. 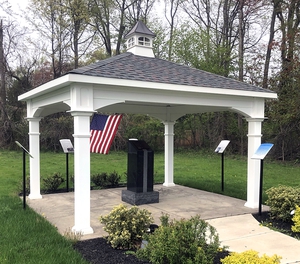 Part of the motivation behind creating this memorial, Acquaviva says, was “to make sure there was something that would help educate the children young enough now as to what it was all about and help people who lived through it to have someplace to gather and remember on 9/11 every year. We also thought there are many instances where some responder does something above and beyond the call of normal duty, and they need to be recognized—a fireman who goes back in a building or a policeman who saves a life by pulling somebody from a car before it is engulfed in flames—and there was no central place for those kinds of ceremonies to take place.” And now there is.

Britanica: The Attacks Of 9/11