It is dedicated to Mrs. Joseph M. Toomey,Jr. who helped to make it possible.

(Taken from the program of the first Annual Awards and Installation of Officers Banquet February 15, 1975)

A volunteer First Aid Squad to provide emergency services for the Township of Lawrence was originally undertaken as a project of the Lawrence Township Lions Club. 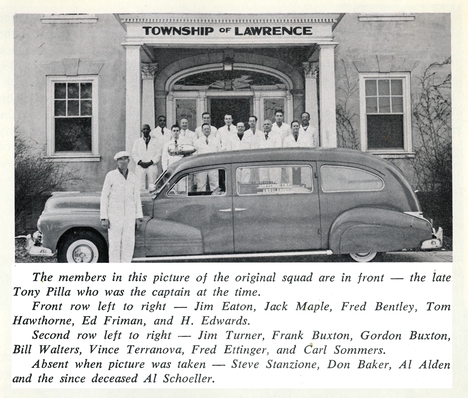 Early in the year 1946 while members were attending an informal dinner meeting at the Lodge (corner of Craven Lane and Main Street, Lawrenceville), a discussion developed over the growing problem of transporting sick and injured people to the hospital. Several meetings later, after consulting with the Township Committee, conducting surveys as to the number of local emergencies admitted to area hospitals, and anticipating future growth of the Township, the members of the Lions Club unanimously voted to sponsor such a volunteer First Aid Squad. Dr. William Wittenborn was president of the Lions Club at the time and Leroy Hepburn organized a committee to seek funds for an ambulance.

An organizational meeting of the Squad was held on October 21, 1946, in the Lawrence Road Fire Company Headquarters at which time eighteen men signified their intention to become members of the First Aid Squad and the following officers were elected: Anthony Pilla, President and Captain; Harold E. Edwards, First Vice-President; Frank Buxton, Second VicePresident; Fred Bentley, Secretary; Edward J. Friman, Treasurer; and James Tucker, Sergeant-at-Arms. The following January "Tony" Pilla requested that he be relieved of his office as President but agreed to continue as Captain and so Harold Edwards became President of the Organization at that time.

The first year of operation, culminating on September 5, 1947, when the group was incorporated as the "Lawrence Township Emergency First Aid Squad" reflects many hours of training and hard work on the part of the membership with assistance from interested public spirited citizens. Squad members received instructions from Clarence "Connie" Evans and Walter Johnson of Public Service Electric and Gas Company, both members of the Red Cross Instructor Corps. Additional valuable cooperation came from the Allentown, New Jersey First Aid Squad under the direction of William Williamson.

In October, 1947, through the continuing efforts of the Lions Club, the Squad finally acquired an ambulance and on the twentieth of that month answered the first emergency call. One of the most popular fundraising activities to help pay for the first ambulance was a minstrel show staged by members of the community at the Slackwood Elementary School. Soon donations of supplies and working funds were offered to the volunteers from many sources within the Township. Blankets and linen were donated by the Lawrence Township Chapter of the American Red Cross, Mrs. Donald Baker, Chairman. The Lawrence Township Republican Club, the Connelly family of Lawrenceville, Mrs. Thomas Bayliss, and the Wagner and Knott Funeral Home were among the very early donors; subsequent donations of linen were made by Mrs. Henry Dantzig as well as the Ladies Auxiliary of the Lawrence Road Fire Company; additional material and equipment were later donated by the American Red Cross. The value of such an ambulance service was recognized when they acted in a "stand -by" capacity at the Thanksgiving Day football game between Trenton Catholic Boys High School and Trenton High School being held at the former Dunn Field site near the Brunswick traffic circle. Shortly thereafter, Lawrenceville Preparatory School (now The Lawrenceville School) asked for ambulance service during their football game with the Hill School. 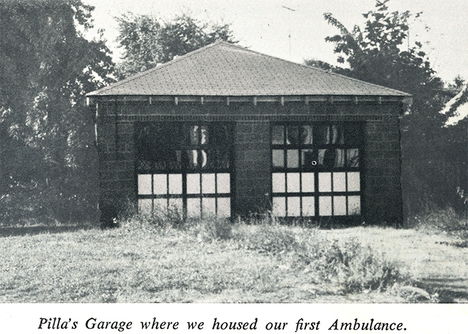 In 1948 the Lawrence Township Lions Club once more came to the aid of the Squad by conducting the first annual Fund Drive. Members recognized the need for financial assistance and could no longer rely on occasional individual donations.

Meetings were still being held in the Lawrence Road Fire Company headquarters and the ambulance was housed in Pilla's Garage of the opposite side of the Lawrence Road. Finally, on May 22, 1949, ground was broken for an ambulance house to be built on Wilson Avenue utilizing a lot owned by the Lawrence Road Fire Company and leased from them for the sum of one dollar. Because of lack of funds, the actual building had to be done on a pay-as-you-go basis by members of the Squad and others who were wiling to donate their time and talents. On April 2, 1951 the ambulance was finally housed in the new building and meetings were held there on a regular basis.

A mutual aid agreement was worked out with the Pennington Road First aid Squad whereby each would assist the other in emergencies. As an example of such early cooperation, the records reveal that in August, 19 51, the Pennington Road Squad completed a call when the Lawrence Township ambulance became disabled. Before too many years passed, a second ambulance was acquired by the Squad to handle the increasing number of emergencies.

First Aid Council, the Squad has immediately available the services of sixteen other First Aid Squads in the event of a major disaster or severe emergency.

Dr. Stanley Wilson was appointed as the first Medical Advisor to the Squad in August, 1952. In succeeding years Drs. William Kressler,

Howard Epstein and J. M. Fiorello have also served in this capacity.

A noteworthy occasion for the Squad was the request in 1953 to provide ambulance service for the Soap Box Derby held that year on Spruce Street. 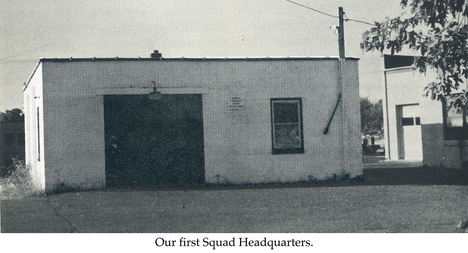 To provide better communication with police headquarters in dispatching emergency calls, radios were installed in the ambulances in 1954. Some years later through the efforts of C. William McGrath, Civil Defense Director for the Township, the Plectron system was inaugurated and it is through this electronic device, activated at police headquarters, that Squad members are still alerted in their homes.

During 1955 a plague was unveiled in honor of Anthony Pilla, first President and Captain, who had died suddenly after suffering a heart attack. On August 15, 1959, the Squad was honored by the Mercer County American Legion with the presentation of their Distinguished Service Certificate.

In February, 1960, the First Aid Squad donated to the Lawrence Township Police Department oxygen units to be carried in all police cars to better and quicker serve any "heart attack" victim where the police arrive first on the scene. Oxygen units were also provided to each Township fire company in the event any fireman might suffer smoke inhalation. In addition, the Squad stands by at every major fire involving a house or building. With the steady growth of the Township and an increase in services rendered by the First Aid Squad, larger quarters were sought and became a reality in 1962 with the construction of the present structure located at 165 Wilson Avenue. Lloyd Carver, who was a member of the Township Committee at that time, assisted in securing a $50,000 mortgage loan from the First Trenton National Bank. Clifford Snedeker, James T. Coxon and Vincent Terranova, Trustees at that time, signed for the loan. The low bidder was Joseph J. Pasquito, Sr., a Squad member, and he was awarded the contract to build. John B. Strasenburgh was the architect. The $70,000 building was dedicated June 17, 1962, with the then Governor, Richard J. Hughes, as principal speaker.

The following year the Squad became affiliated with the Lawrence Township Fire and First Aid Council. Representatives of the Squad still meet regularly with members of the three fire companies and Township Council to discuss problems of mutual interest.

Through the efforts of Sergeants John Kertland and Lyndon Simmerman of the New Jersey State Police, squad members became interested in learning more about heavy rescue operations. Each year since 1963 the Squad, in conjunction with the New Jersey Civil Defense, has sent a group of members to Hammonton, New Jersey, for this valuable training. In conjunction with the Township Civil Defense Diaster Control, a 1967 International heavy rescue truck is now available for emergencies. The truck is equipped with a portable generator and carries tools and equipment necessary for carrying out heavy rescue operations.

A stair chair, used to transport a patient down stairs in a safe and comfortable manner, was donated by the Lawrence Ladies Social Club. The club made other donations over a number of years.

A training aid known as "Resuci Annie" was purchased with monies donated by the Lawrence Township Lions Club. This mannequin is used to teach and demonstrate both mouth-to-mouth resuscitation and

In 1969, the Benjamin Franklin P.T.A. donated a child's wheel chair in memory of the McMahan children who lost their lives when a fire destroyed their home in Lawrence Township.

The Lawrence Township First Aid Squad made the front cover of The Gold Cross, official magazine of the New Jersey State First Aid Council, Inc., for September, 1971 in a picture showing the then Senator Richard J. Coffee receiving a citation from Squad Captain Richard Laird and President George Welde. The citation was awarded for "an act of First Aid rendered by a person other than a member of a First Aid or Rescue Squad resulting in the saving of a life". Senator Coffee had prevented former Mercer Senator J. Richard Kafes from choking to death during the annual dinner of the State Legislature's Joint Appropriations Committee. 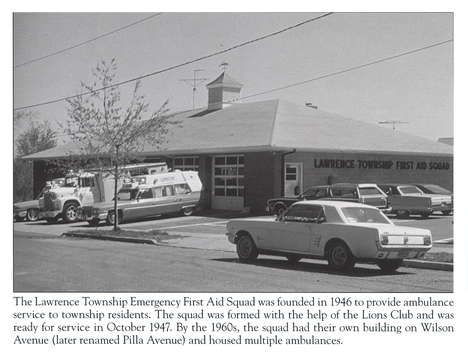 The Squad, operating as a nonprofit organization, provides township residents with twenty-four hour volunteer ambulance service. Finances are derived from three sources, namely: unsolicited individual contributions, a yearly donation from the Township and an annual drive for funds conducted by the members each May. It is interesting to note that in a report submitted by Walter M. Vandewater, Chairman of the State Mobilization Committee, and presented at their convention in October, 1971, in Atlantic City, a typical community served by a volunteer squad would at that time be expected to raise between $250,000 and $500,000 per year to replace the volunteers with paid personnel.

The Squad now has two modern ambulances containing all the standard first aid gear, resuscitators, and other sophisticated equipment for use in all types of emergencies. During 1974 the Squad purchased a piece of equipment known as the "Jaws of Life" which is invaluable in extricating victims trapped inside a vehicle at the scene of an accident. The Squad also maintains aids such as wheel chairs, hospital beds, walkers and crutches for use by residents of the Township.

Senate Bill No. 2310 of the State of New Jersey, signed into law by Governor William T. Cahill in January, 1972, makes more stringent the requirements for membership in a first aid squad. Heretofore it was only necessary to ,pass an advanced First Aid Course given by the Red Cross while, under the new law, members must take additional training in specialized fields such as Cardio-pulmonary Resuscitation (popularly known as C.P.R.), Emergency Child Birth, Defensive Driving and Extrication. Under the new legislation ambulances and

ambulance equipment will also be required to meet new safety standards on a yearly basis.

For many years the Squad had a rule that only registered nurses would be admitted as female members. Eventually that rule was eliminated and membrship was opened to any female who could qualify.

As a result, in January 1972 Mrs.Irene Carroll became the first non-nurse female member and since that date a number of others have joined the Squad. Mrs. Carroll proved her ability when on August 17, 1972 along with Lawrence Township Patrolman Jan Murray, she helped to save a baby's life with mouth-to-mouth resuscitation. For his lifesaving efforts Patrolman Murray received the Squad's Certificate of Citation, an honor reserved for any person other than a first aid squad member who performs an act of First Aid which results in saving a life.

Records of the Squad reveal that back in 1948, the first full year of operation, 148 calls were answered and the total miles covered amounted

to 2,597. From these humble beginnings, the most recent records indicate that for the year 1974, there were 915 calls answered and 11,355 miles covered. During those 26 years the population of the

Township of Lawrence has just about tripled.