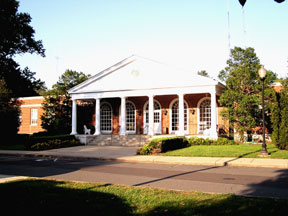 The governing body consists of five council members elected at large who serve four-year terms.  The elections are partisan and occur every two years in November. The Mayor is elected by the council members and serves a two-year term.  Council acts by majority vote to enact legislation and set policy for the municipality.   It appoints the Municipal Manager, who acts as the chief executive and administrative official of the municipality.  The Municipal Manager is primarily responsible for the municipal government's day-to-day operations, prepares the municipal budget, appoints and removes department heads, and attends council meetings with voice but no voting rights. The Town Manager and Town Clerk attend all Town Council Meetings, the latter serving as Secretary and as custodian of all minutes, ordinances, resolutions, bonds, deeds and contracts.